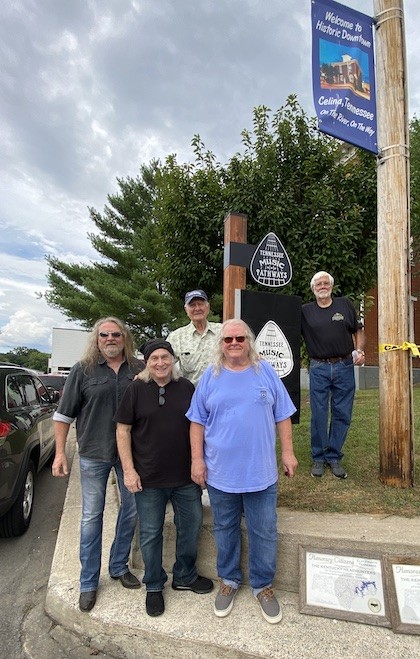 On Aug. 18, 2021,  a dedication ceremony for a Tennessee Department of Tourist Development marker commemorating the life of Dumas Walker was held on the courthouse square.

Dumas Walker’s Store, as made famous by the Kentucky Headhunters and inspired by Clay County, Tennessee, native champion marble player Dumas Walker has been honored by the State of Tennessee with a new “Tennessee Music Pathways” marker in Celina, Tennessee.

In 1990, the Kentucky Headhunters, a Southern rock band from Edmonton, Kentucky, scored their second hit, “Dumas Walker,” on the country charts. The song was credited to all five then-current members of the group – Doug Phelps, Fred Young, Greg Martin, Richard Young and Ricky Lee Phelps.

A large crowd gathered on a hot afternoon to hear stories from three of the Headhunters, Phelps, Martin and Richard Young, about the writing the song, their own youth and musical history and Dumas Walker himself. Walker’s nephew, Alan West, shared family stories and memories of Walker. Also present was Walker’s brother, James, who drafted the original plan for the store and applied for the business license for it.

“Dumas Walker” came from the Headhunters’ No. 2 country album, “Pickin’ on Nashville” and followed their previous hit, “Walk Softly on This Heart of Mine.” The music video aired on CMT (then exclusively a video channel) and featured Dumas Walker in a cameo appearance. Then 74 years old, he owned Walker’s Package Store on Tennessee Highway 52, in Moss, Tennessee, just south of the Kentucky-Tennessee state line.

The gallery at the bottom of this page shows the enthusiasm for the song, the Kentucky Headhunters and the legend of Dumas Walker.

In the photo below are members of the community, the media, local leadership and representatives of the Tennessee Department of Tourist Development. 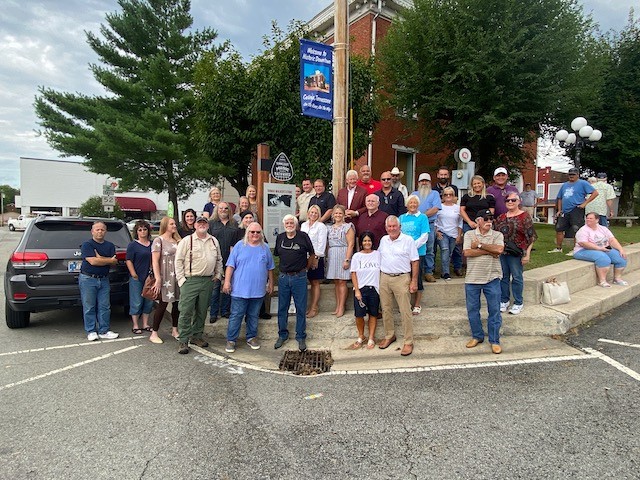 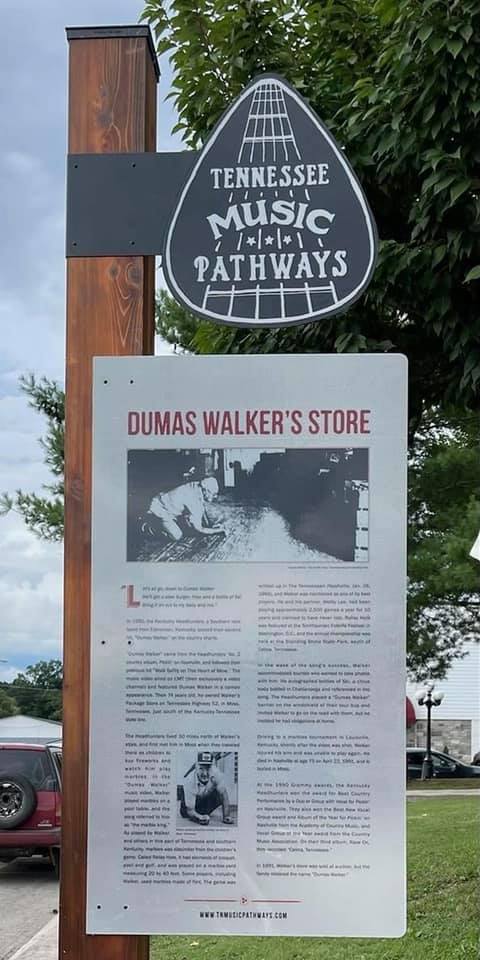 Dumas Walker and the Kentucky Headhunters

“Well, let’s all go down to Dumas Walker’s.” This intriguing invitation is the first line of 1990 hit song ”Dumas Walker” by Country rock band The Kentucky Headhunters.

Written by the band’s members at the time, Doug Phelps, Fred K. Young, Gregory Glen Martin, Richard Oren Young  and Ricky Lee Phelps, the song almost did not make it onto their 1989 debut album, “Pickin’ on Nashville,” because their record label believed the story was to regional to have any national appeal. The band insisted, and the catchy tune became a No. 15 hit that stayed on the charts for 26 weeks. 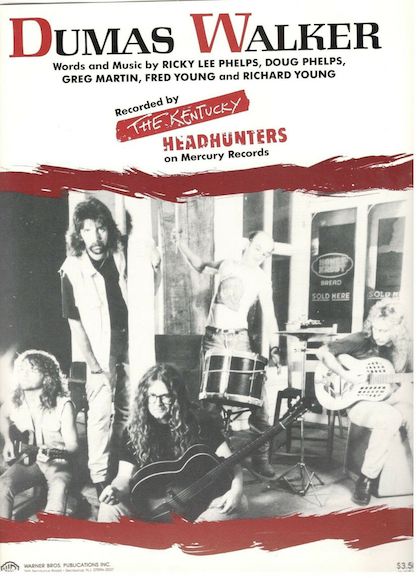 “What they didn’t see, was the reaction we got to it every night that we played it in front of a crowd, and it didn’t matter where we were playing either,” Doug Phelps said in a 2007 interview on the Liberty ‘n’ Justice website. “What we discovered was that there was a Dumas Walker’s in most everyone’s lives, and by the time you added a good groove to it, people were hooked!”

Yes, Dumas Walker’s was a real store, and there actually was a man named Dumas Walker who owned it. According to Phelps, Walker, lived and owned a package store just across the Kentucky/Tennessee line at Moss, Tennessee, an unincorporated community also known nationally for its log home manufacturer, Honest Abe Log Homes.

“Dumas Walker’s was a place where you could buy beer, snacks, fireworks on the 4th of July and just a small place where the old timers could hang and visit,” said Phelps, who was not originally from the area. “It was a part of the Kentucky boys’ lives growing up, and we just decided to write a song about it and him as sort of an ‘ode to Dumas.’”

Walker was a world champion marble player for the game of Rolley Hole. The game is a team sport competed in by adults with handmade marbles. Walker was so good that people would come from miles away to watch him play. The National Rolley Hole Marble Tournament is held each September at Standing Stone State Park to preserve and celebrate this traditional game.

In the song’s lyrics a couple go to Dumas Walker’s after seeing a movie at the local drive-in.

“Got a pocketful of money, and I’m rarin’ to go down to Dumas Walker right after the show,” says the narrator. “They’ll be shootin’ marbles in the back of the store and laying money down on the floor.”

The song paints Walker as a bit crotchety, saying that the old man doesn’t like young folks hanging around.

“He’s quick to let you know we got a law in this town. You ought to see him grinnin’ when he walks through the door. The marble king is ready for more.”

Walker was 74 years old when the Headhunters, some of whom had known Walker since they were children, convinced him to show his marble skills in their video for “Dumas Walker’s.” Headhunter Richard Oren Young recalled some of his memories about Walker in an interview on songtek.com.

“Dumas could take two marbles, just one trick for instance, and set them two inches apart maybe, at 30 yards away,” he said. “And I couldn’t even see the marbles, and he could hit another marble, it would go between those marbles, hesitate, and come back to him, and of course nobody knows how he did that, really… We started going down there when we were just kids, getting fireworks, cause you couldn’t get fireworks in Kentucky. Naturally he laid that trick on us, and us being kids we were mesmerized by it. That was his trick to get you to come back.”

A few years before he died Walker broke his arm in a car accident, rendering him unable to play marbles the rest of his life. When he passed in 1991 the store was sold to new owners. However, his widow, Hazel, refused to sell his name, so the store was not allowed to be called “Dumas Walker’s.”

One line in the song captured another youthful memory of getting “a slaw burger, fries and a bottle of Ski,” and though attributed to occurring at Walker’s store, actually referred to a restaurant called Adolphus Ennis Lunchroom in Greensburg, Kentucky. A slaw burger is just a hamburger with a helping of mayonnaise-based slaw on the bun. SKI is a citrus soda made from real orange and lemon juice. Now manufactured by the Double Cola Company, it was formulated in the 1950s and has remained popular in the areas where it is distributed, including Southern Kentucky where most of the Headhunters grew up. 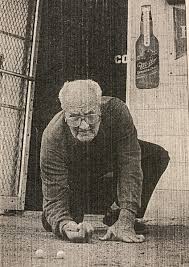 The Kentucky Headhunters’ “Pickin’ On Nashville” album produced four Top 40 hits, “Walk Softly on This Heart of Mine”, “Oh Lonesome Me,” “Dumas Walker” and “Rock ‘n’ Roll Angel.” It was certified Platinum in only seven months, making the album the first to achieve a million sales in such a short period. In 1990 the band won a Grammy Award for Best Country Performance by a Duo or Group with Vocal, Best New Vocal Group award from the Academy of Country Music (ACM) and Album of the Year and Vocal Group of the Year awards from the Country Music Association (CMA).

“Well, we were just a bit ahead of our time, I think, when you look back on it now,” Phelps told Liberty ‘n’ Justice. “Our influence is all over country radio now. There are all kinds of acts that aren’t afraid to put some rock and blues into their music now. I hear the influence all the time.”

This article was published in the Larry’s Country Diner and Country Family Reunion Magazine about the Moss, Tennessee, resident whose story inspired a hit song. Click here to check out the magazine.

We cannot display this gallery